You Are My Hero 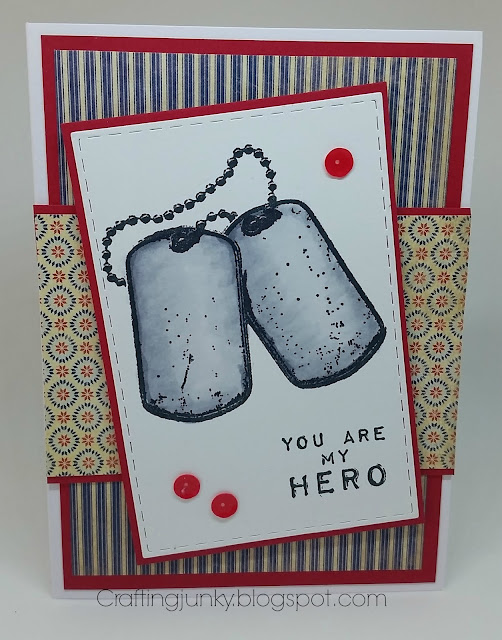 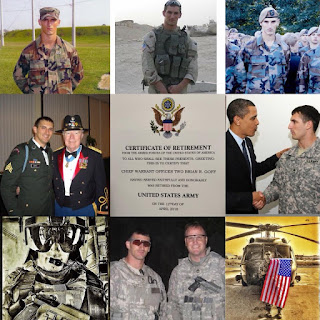 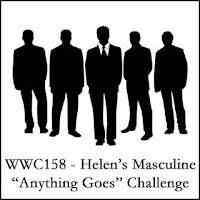 Hello and thank you for visiting my blog! Today's card was created for the latest Watercooler Wednesday card challenge and is in honor of my son's retirement from 15 years of active-duty service in the U.S. Army. This young man has had quite a remarkable career and I could not be more proud of him! He started his military journey doing OSUT (one station unit training) for 8 months at Ft. Benning in Columbus, GA where he did Infantry, Advanced Infantry, Airborne, and Ranger training. He then got stationed with B Company, 2nd Ranger Battalion at Ft. Lewis in Tacoma, WA. He did 2 combat tours with them to Iraq and Afghanistan and then changed his MOS to 97 Bravo where he trained for interrogation at Ft. Huachuca in Sierra Vista, AZ. He did another tour to Iraq with the head of the Multi National Forces. When he returned back to the states he applied for and was accepted to flight school at Ft. Rucker in Enterprise, AL. After 2 very grueling years of school, training, and SERE he received his flight wings and graduated as a Warrant Officer flying UH-60 Black Hawks! He was stationed at Ft. Campbell on the Kentucky/Tennessee border. I liked him being stationed there because it was a quick drive from where I live. He did another combat tour to Afghanistan with his new unit and came home to get stationed to yet another base. His final destination with the U.S. Army was Ft. Hood in Killeen, TX where he was promoted to Chief Warrant Officer II and made lead pilot of his air navigation team! My son started out at Ft. Benning as an E-1 Private and in 15 years became an officer and a pilot! I could not be more proud of him and all he's accomplished! He's going to be a dad for the first time next month and finds himself having to write a resume for the first time in 15 years. He's now enrolled at TCU in Ft. Worth, TX and will be starting an MBA program this fall. I can't wait to see what he does with the next chapter of his life! But in honor of all he's accomplished to date this card is in honor of him!
To create my card I started by layering some real red cardstock from Stampin' UP onto my white card base. I then layered some patterned paper from the Authentique Pride 6x6 paper pad onto top. I then stamped the dog tags and sentiment from the Unity Stamp Company's Dog Tags & Thanks stamp set onto some Copic-friendly cardstock. I die cut the panel using a stitched rectangle die from Gina Marie Designs and popped it up off of the card using some inexpensive fun foam I picked up at Hobby Lobby. I colored the dog tags using my alcohol markers and then added a few bright red sequins to the panel to finish it off.  Thank you for visiting and be sure to leave a comment if you like my card!

Wow Celeste, no wonder you are so proud of what your brave and clever son has achieved. It must have been so worrying for you all while he was on duty O/S.

Your card is brill...just perfect for a tribute to him and his service.

I have to say, I'm proud of him too and grateful for his service! I wish him nothing but the best as he forges his new path. The card you made of him is wonderful Celeste, perfect in every way!

What an amazing life your son has lived and experienced. He is what makes a country and it's peoples strong. Congratulations on his retirement, new job prospects and new baby on the way. So many changes and such a life well lived. The card is simply beautiful and really shows your pride in him. Thanks so much for sharing at the Watercooler Wednesday Masculine challenge this week. Couldn't get any more masculine than this.

So thankful for mn like your son! Wonderful card! Thanks for joining us at Watercooler Wednesday Challenges!

What a wonderful card you've created for your son, Celeste! I love the background papers and the a-kilter stitched rectangle for the main image. I'm sure your son will love it and the sentiment which you so obviously feel deeply. Thanks so much for joining our Watercooler Wednesday Challenge this week.

Celeste, You have to be so very proud of your son. How exciting to be celebrating 15 years of service and his retirement from active duty. Please pass along our appreciation for his service and best wishes as he enters the next phase of his life.

A very touching post... and a fabulous card to go with it. You share such wonderful stories, and thank you to your family and their service!

The Paper Players Cut Above The Rest

The Paper Players Cut Above the Rest

Just Us Girls Chic of the Week

The Cat's Pajama's Swanky Stamper of the Month

Celeste Goff
Cape Girardeau, Missouri, United States
I'm a single mom and grandma who loves cardmaking and crafting. I love to spend my spare time exercising, crafting, hanging out with family and friends, and reading a good book while sipping on some wine or coffee!